An idea came to me while solving the mirror puzzle in Uncharted 2 [1], of how cool it would be if I made something similar out of LEGO. I could use a laser as the light beam, glue tiny mirror tiles to the 2 by 2 LEGO tiles, and have wheels and cranks to turn the mirrors. Then finally a light sensor would pick up the directed beam and activate a servo motor to open a door. Or something like that.

Unfortunately the laser won't be visible by itself. I need to create some sort of fog. I searched for hours about low-power, small fog machines. Found a few that are for photography or magic tricks, but these are all very expensive, and require a very specific liquid to operate (which is also expensive). And then I found the simplest solution: 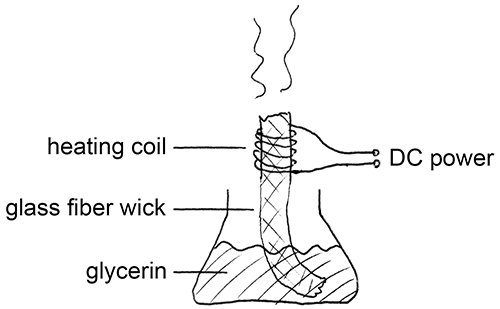 The basic working principle for a fog machine [2]. The wick soaks up the glycerin, and the heating coil vaporizes it. The power through the coil is 7.4 watts in my implementation.

This is also how electronic cigarettes work [4]. So instead of messing around with wicks and coils, I could buy an electronic cigarette's heating element, which has both a coil and a wick in a single, compact unit. These are sold separately as spare parts, with a huge selection on different types of wicks, and resistance values for the coil. 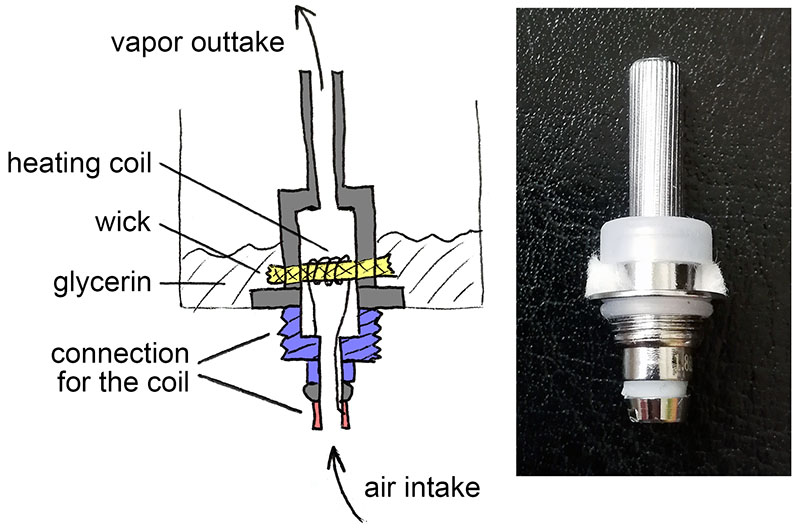 Working principle of the heating element in an electronic cigarette. The connection surfaces for the coil are marked red and blue. It works on the same principle as a lightbulb socket, but in my case I had to solder the wires directly to it.

Electronic cigarettes use food-grade vegetable glycerin mixed with propylene glycol and nicotine, called the vape juice. Of course, for my fog machine there is no need for nicotine, so instead of vape juice, I can use pure vegetable glycerin. It can be bought in any organic shop or pharmacy and it's cheap, especially considering how low it's consumption rate is, so half liter is almost a lifetime supply. The one I use has a purity of 99.5%. 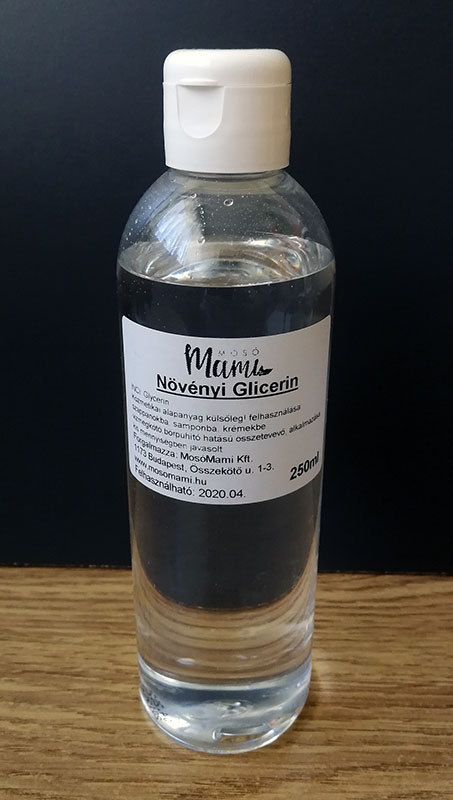 Glycerin [3] is not to be confused with Nitroglycerin. It's non-combustible and non-toxic (smokers inhale it all day), used in many things from food to healthcare products, and of course for fog machines.

The heating element I'm using is a KangerTech MT32 Coil (SOCC), with a resistance value of 1.8Ω. This one has a cotton wick, which requires some caution, as the wick could burn away if not soaked properly. It needs about 5 minutes between adding the glycerin and powering up for the first time. And be on the lookout for when it ultimately runs out.

So much smoke, and it barely used a single drop of glycerin. I will probably need a stronger laser though.

For the assembly I used two pill bottles glued together [4]. The upper one is an upside down cap, holding the glycerin, and the heating unit at the bottom. The lower one is the upper part of another bottle (from shoulder up), forming an airtight chamber. This is where the air goes in from the pump, and the only way for the air to go out is through the heating element. This chamber's secondary function is to collect any glycerin that drips from the heating unit. That's why it has the cap, so it can be drained. 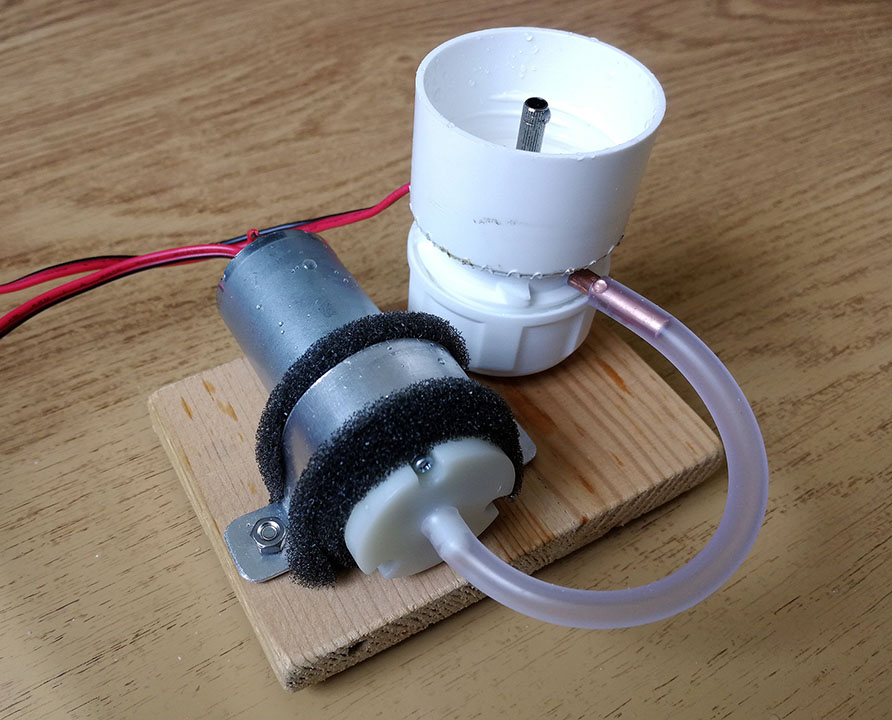 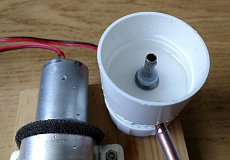 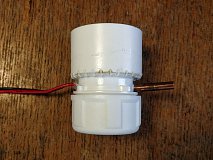 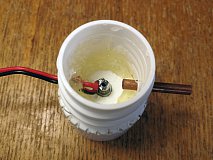 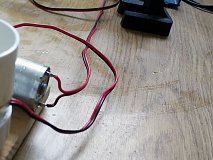 My current implementation of the fog machine with the air pump.

Since the vapor comes out hot, or at least warm, it's lighter than air and that makes it ascend. In the end it more or less fills the room evenly. But for some effects I would rather go for a low-lying fog. What I have noticed during my research for fog machines is that some cheaper models have a compartment for ice as a sort of passive cooling. And that's it! You just have to cool it down.

The cold vapor. It literally flows, almost like water.

For that purpose I had built a small cooling module, which uses ice and cold water. The vapor is led through a long copper tube that runs inside the cold water. Copper has good thermal conductivity, and is easy to bend by hand without the need to heat it up first. To make that perfect spring shaped part, it can be bent around a rod. That can be another pill bottle or even a broom handle, basically anything that has the desired diameter. The rest was bent using a vice and a plier. 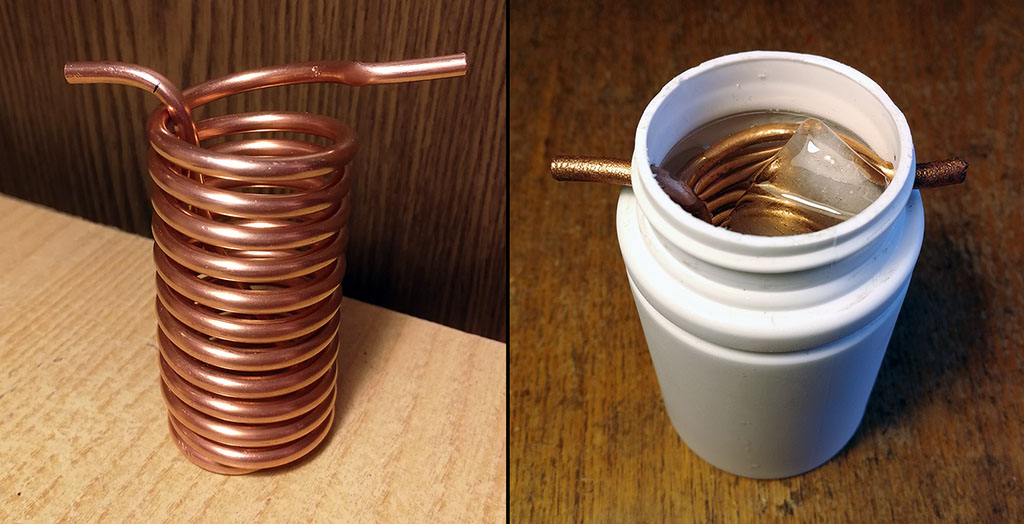 The cooling module, using ice and cold water. Efficiency-wise it might be too small though (this was the largest pill bottle I could find at the time), I will make a larger one next time, or try active cooling. The copper tube is from eBay, it's around a meter long in the final assembly. The bending was done by hand, no heating.

In the next article I will showcase the finished controller unit, with schematics and source code (for the Arduino). Hopefully by then I will have an improved design for the housing of the heating element as well, along with a more efficient cooling module.