The compressor is going to be part of a GBC module later, an updated version of what was featured in this previous article. But until then, let's have some fun!

So, people were wondering how much time it takes for my air compressor to blow a balloon until it pops. With this configuration it's about 20 minutes. Not exactly fast, but it was designed with other goals in mind: low noise, steady airflow, and low wear, so it's not really pushing its limits.

I'm sure I can bring this time down to around 5 minutes by using two XL motors, directly driving 2 pumps each, but I don't want to take this MOC apart until I have documented it, so maybe another time.

I sped up the video anyways, so it blows up in a few seconds. Enjoy!

To interface the balloon to the LEGO parts I have used a modified syringe. I removed the plunger and the flanges, leaving just a tube with a small and a big end. The small end is perfect for the LEGO pneumatic tubes, and the other one is large enough for the balloon. However, at high pressure the balloon went off flying, so I used duct tape to secure it in place. 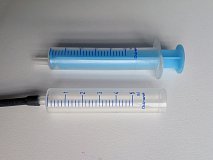 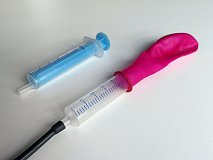 Interfacing the LEGO pneumatic tube to the balloon.